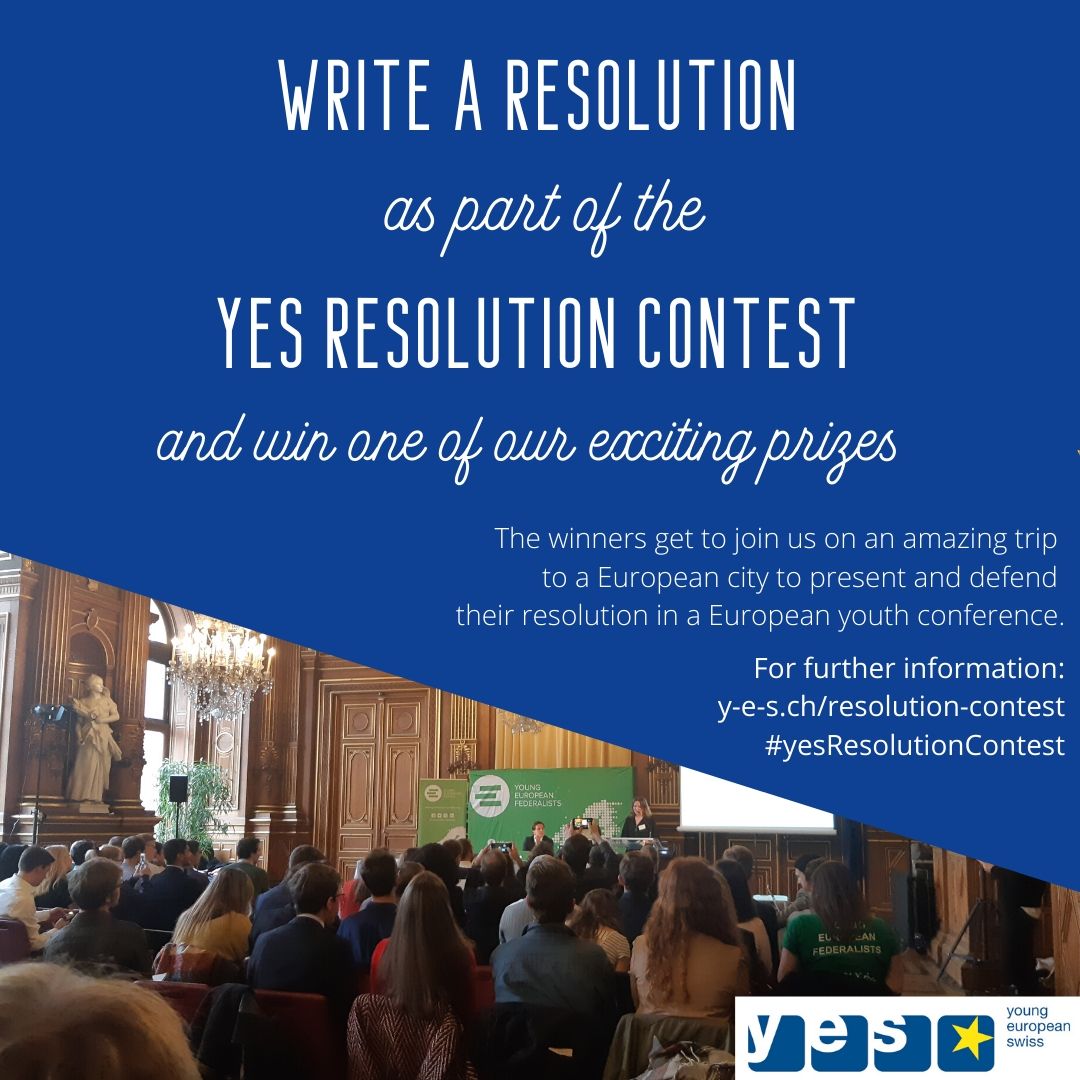 What is the yes Resolution Contest?

It is a contest for young people in Switzerland between the ages of 18 and 30. The participants, alone or in teams of maximum two persons, will write a resolution on a given topic. The winner(s) of the 1st prize will have the chance to accompany us as members of the Swiss delegation to the JEF conference in October 2020 and to present and defend their resolution. All travel and conference registration costs (including accommodation) will be covered by yes.

In addition, there will also be prizes for 2nd, and 3rd places and all participants will receive a certificate of participation, thanking them for their time and effort.

We are looking forward to your contribution and to represent Switzerland together with you!

JEF (Young European Federalists) is a European youth organisation committed to the creation of a democratic European federation as a basis for peace and a guarantee for a freer, fairer and more democratic society. JEF has sections in most countries of the European continent. Young European Swiss / yes is a member of JEF and as such counts as the Swiss section of JEF.

Every six months JEF organises a conference which brings together a large number of its national, regional and local sections in Europe, each time in a different city. These conferences, called Federal Committee (FC), take place in spring (March-April) and autumn (October) and bring together about 100 to 150 people from all over the continent. Delegates discuss current topics, vote on political resolutions and of course also participate in the social and cultural aspects of the conference.

The lucky winner(s) will accompany us to the JEF FC conference in October 2020!

Topic of the resolution

The topic of the resolution will be the following:

European foreign trade in the context of resurging nationalism and protectionism

This topic was chosen for its particular relevance in the present geopolitical context as well as for the diversity of points of view that can be taken on this subtle and complex issue.

Generally speaking, foreign trade between the EU and its partners is more strained now than ever, as it has come under fire from both nationalists and protectionists outside the EU. At the same time, more and more people in the EU are advocating that foreign trade should be used to further other goals, such as promoting higher environmental standards and strengthening human and social rights.

Even though the focus here might be on the EU’s foreign trade, similar concerns and issues arise for the EFTA countries, like Norway and Switzerland.

Questions a resolution must address

The questions the resolution must address are, by order of priority (from highest to lowest), the following:

Calendar of the yes Resolution Contest

Detailed Terms and Conditions of the yes Resolution Contest

Should there be any questions after reading the Terms and Conditions, you may contact us (in German, French or English) under the following address: resolution-contest@y-e-s.ch. All submissions shall also be made to this address.

We are looking forward to your participation and perhaps to travelling with you to represent Switzerland at the Autumn JEF FC!